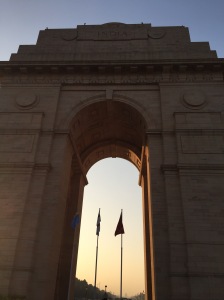 As with many of our travel posts, this one finds me up early, sat in a dark corner of our hotel room furiously typing whilst the rest of the family sleeps on. So begins our second day in India.

We almost didn’t make it after our taxi to Guangzhou airport let out a painful sigh and then started limping to the left about half way to the airport. Neither us nor the driver could figure out what had happened but by the time we reached the hard shoulder the car had a painfully deep scratch down the whole length of the left hand side and a tyre that was flat beyond repair.

But, after an hour standing by the expressway, being covered in the dust of passing trucks and serenaded by heavy freight horns, we were picked up by another taxi and made it, Home Alone 2 style, through the airport and onto the plane.

“Remember it’s an adventure, not a holiday, and you’ll be fine,” was the advice given to us time and again before embarking on our latest trip. This became my mantra all the way through our arrivals experience.

This being our first time in India, I can’t say that immigration at New Delhi airport is always this chaotic, but our experience was both long and frustrating.

Thinking it would save us time, we used the e-visa website prior to arriving to sort out our visas online and sure enough, there were special e-visa queues and they were a lot shorter than the regular queues (both Indian national queues and foreign national queues were hundreds of people long and moving at a snails pace).

After about 45 minutes nobody seemed to have moved and then the queue, en masse, noticed a family moving along the queue, on the other side of the barrier, towards the immigration counter. They weren’t going to queue.

Simultaneously, the barrage of questions started ‘why do you think you don’t have to queue?’ ‘Who told you you can go there?’ ‘This is ridiculous!’ And my personal favourite, ‘That lady needs an education!’

In response to the impending lynching, one of the men behind the immigration counter asked her to step back and join the queue, but it was too late, other people had seen what she was doing and were now forming their own queue behind her on the wrong side of the barrier!

In response to this 4th, unauthorised queue, the immigration officials finally decided that action needed to be taken and so they asked that people with children should come forward first and owing to our 3 year old who had spent the previous hour alternating between screaming the arrivals hall down and tripping people up by running in front of them, it was decided unanimously that we should go first.

In the words of Alanis Morisette ‘thank you India’

Once we were at the desk the process was simple. Photos, fingerprints, visa check, repeat and then we were through. Welcome to India.

Here started my second quest of the day, finding cash in a country that is currently experiencing a run on ATMs and has a limit of around $60 at exchange bureaus. But more on that later, it deserves its own post.

After clearing the compulsory duty free shops that you seem to be inclined to walk through after immigration, we located the baggage carousel information board. “Guangzhou, Carousel 12”. So we headed to carousel 12 and sure enough, there was a slow train of luggage snaking its way up and down the baggage claim area. However, the sign at carousel 12 read ‘Addis Ababa’.

Slightly confused, a little tense because of the immigration experience and worrying that the person collecting us from the airport would leave us stranded (it was now 90 minutes after the plane had landed) I headed towards a important looking man in a suit who seemed to be directing the baggage handlers and, more importantly, was wearing a badge.

“Is this the baggage from Guangzhou,” I inquired, in the slow and laboured English or a tourist on their first encounter with somebody from a new country.

“Addis Ababa,” he replied with finality and began walking away. I jogged to catch up.

“But the board over there says Guangzhou,” I continued, slightly out of breath from the short jog.

“But that board says Addis Ababa,” the man replied, still walking. He had me there. The other board did indeed say Addis Ababa.

“But look, this board,” we were now back at the first board, “says Guangzhou.”

“Then 12 is Guangzhou,” he said before taking out his phone to signal that the conversation had ended and striding off to a part of the airport into which I could not follow.

We eventually found our bags looking a little lost and lonely by themselves on a baggage trolley at the side of the arrivals hall. Clearly they’d already had their allotted time on the carousel and had been removed pending a trip to left luggage.

Almost 2 hours later, and with a quick detour for a routine customs scan of our suitcases (we were chosen at random, clearly we looked like we’re were in too much of a hurry) we emerged from the airport almost directly in front of a smiling face holding a sign featuring my name.

“Remember it’s an adventure, not a holiday and you’ll be fine”

I’ve wanted to go to India for as long as I can remember. The minute we emerged from the ‘unique’ experience that is Delhi airport, all was forgiven, we were ready for the adventure.

1 comments on “Visas & Immigration in India”