‘Roam Alone’ An Out Of Season Boat Tour

Continuing what seems to be a trend of empty venues, we spent our day yesterday on a river tour of the Tonle Sap area around Siem Reap. An empty mini bus lead to an empty motor boat which lead to an empty river boat. We booked through taraboat.com, owners of the self proclaimed “Biggest Boat on Tonle Sap Lake” and spent the entire day completely by ourselves. We sprawled on the empty seats on our way to the lake, took our pick of chairs in the wooden motorboat that took us through the floating village and then ate a meal and lazed in hammocks on board a ghost ship. It was heaven.

Being collected from our hotel at a slightly more family friend 9:50am, we received a call in our room around 9:40am to tell us that our guide had arrived. Similar to our Angkor Wat tour, the guide was accompanied by a driver although this time we jumped aboard a 12 seater minibus and, as the only scheduled passengers for this tour, took a row each to stretch out.

We hadn’t been in the minibus for 15 minutes when the driver pulled over and the guide jumped out to show us the flooded lotus flower fields which spread into the distance. Much to the amusement of a couple of locals who were busy tending to the thatched roofed picnic platforms that balance above the water, we carefully picked our way across a bamboo bridge and out into the field for a photo stop.

Returning to the minibus, the guide informed us that the locals loved to eat the lotus flower seed heads as a snack and pointed in the direction of the small stalls along the main road where metal bowls of carefully balanced seed heads were placed in the shade. For $0.50 he lead me to a stall and bought a bunch of seed heads for us to try. ‘They taste just like pee’ he advised. Maybe it was my apprehension that stopped me from hearing him correctly but once he’d popped one out, the little green ball made me realise what he had said. And he was right, they did taste like peas. Bitter, chewy peas that don’t warrant a second tasting.

Next stop was the dock where our guide bought us tickets and we headed down a rickety gangway at the end of which a group of old wooden motorboats jostled for access. It seems that the dock rule is just to get your boat to touch the end of the gangway by any means necessary. In order to ensure access to tourists, these boats practically pile one on top of the other in order to dock. Our boat had unfortunately missed the boat in this competition but this problem was easily solved by using other closer boats as an impromptu walkway across the water.

Once we were aboard (and again, we were the only passengers) the boat put-putted out from amongst the crowd and set out up river towards Tonle Sap lake and the floating village.

The floating village is a feat of ingenuity that is genuinely staggering to those of us fortunate enough to live in relative prosperity on dry land. Accordingly to our tour guide it is a Vietnamese creation, populated by migrants from Cambodia’s eastern neighbour. 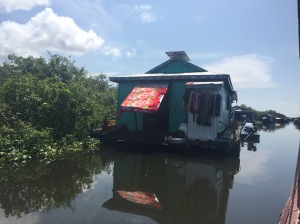 Depending on the time of year it moves from the edges of the lake inland as the water level rises. When we visited, the houses, fish farms, schools, churches and shops that make up this awe inspiring collection of aquatic homes were nestled 6m above ground in amongst what earlier in the year were the tree tops of the lakeside forest.

The creativity born of necessity in this place was astounding. Watching boat loads of children, many no younger than my own, rowing themselves through the water; our tour guide told us they were taking themselves home for lunch after attending the floating school. Taraboat.com states that they use some of the money made from showing tourist groups around the area to support these schools and having seen the children first hand, I was incredibly glad that they did.

Lunch on the Queen Tara

After touring the floating village we docked with the Queen Tara in much the same way as the boat had docked with the jetty at the end of the river; namely by bumping into it. We arrived just as a Chinese tour group was leaving and discovered on their departure that we had the entire boat to ourselves. We took a table on the shaded middle deck, ordered some food and drinks and were then invited to check out the hammocks at the back of the boat whilst we waited for our meal to be prepared.

Swinging in hammocks was undoubtedly the highlight of the trip for our children. They absolutely loved it. The proximity of the hammocks to the edge of boat (a pretty low railing on the other side of which was a short drop into the muddy depths of the Tonle Sap lake) did nothing for my blood pressure, but it kept the kids occupied whilst we waited for our food.

Sadly, the food wasn’t really worth waiting for. We ordered sweet and sour chicken for ourselves and fries for the children as nobody was really that hungry. The sweet and sour came first and ncouded a generous amount of pineapple and vegetables although I suspect this was to hide the fact that it didn’t really contain any chicken. Indeed, the chicken it did contain would be better described as ‘flecks’ rather than pieces with none being any bigger than a cm in any direction.

The fries made an appearance about 15 minutes later once we’d Ickes through the sweet and sour veg and were made of potatoes that I’m pretty sure would have had a good chance of sprouting had I replanted them.

With that said, he hadn’t booked the tour for the food and our guide was very attentive, making sure we had enough drinks etc and so it made no odds. We were still enjoying the tour.

After lunch we were told we had another 20 minutes to enjoy the boat and were given the chance to take some photographs behind the boats steering wheel which our eldest loved.

After that, it was down the stairs and back into our motorboat for the trip back to the dock and home again.

Arriving at the jetty we were accosted by several children holding commemorative ceramic plates with our pictures on them. This really puzzled me at first, especially as the plate featuring our daughter was pretty nice. But then it dawned on me that as we waited for our tickets earlier in the day a random guy had appeared with a camera and taken some photographs. Living in China we’re quite used to this and so had just brushed it off as another case of ‘let’s take pictures of the white children”. But it seems it had a purpose.T

he plates were quoted at $10 each which is expensive by anybodies standards and so we politely declined and jumped into the minibus. The plates were promptly pressed up again the windows by the sellers, shouting “ok, I make you a deal, $5”. But not wanting a plate featuring my sweaty red face as I fished in my bag to get my son his water bottle for the 11th time in 5 minutes we said no and drove off with the ceramic faces of our own children staring disapprovingly from their porcelain circles.

The guide offered to drop us anywhere we liked after the tour was over although being in possession of two tired children who were threatening industrial action if we didn’t get to the swimming pool a sap we headed back to the hotel.

Trip booked through taraboat.com “Half Day Tonle Sap Lake Tour” Price for adults $29. Children 5 and under FREE. Children 6+ Half Price